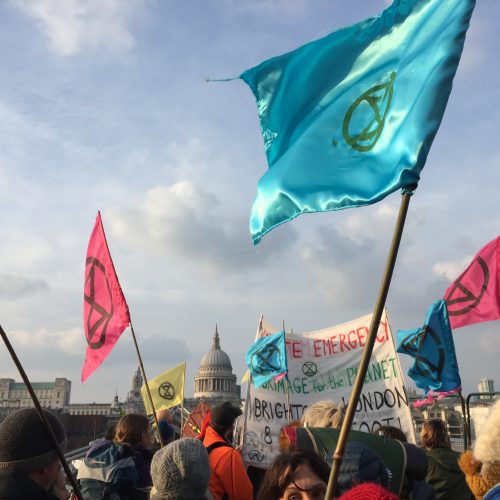 Mothiur Rahman, a member of the Art/Law Network and involved in the recent phenomena of Extinction Rebellion sums up some of the key points of the movement that may be of interest to those working on the art/law intersection.  ‘XR’ has an interesting Declaration of Rebellion as well as the proposed use of Citizens and Peoples’ Assemblies, placing law at the heart of social change, through some fairly creative tactics.

Extinction Rebellion is a movement that has burst into the consciousness of the public though its colourful, heart-felt and creative acts of civil disobedience over 10 days from April 15th.

Extinction Rebellion’s strategy is based on non violent civil disobedience and putting the government into a dilemma situation where either they mass arrest everybody or take the hit of economic disruption.   Mark and Paul Engel’s book “This is an Uprising” forms a central part of its movement building strategy.

Economic disruption was created by blocking 4 sites in central london – with a pink boat at Oxford Circus to “tell the truth” about the climate and ecological emergency; turning Waterloo Bridge into a garden bridge with the demand to “Act Now”; Marble Arch roads blocked and turned into a festive “rebel for life” site, and Parliament Square blocked and holding of Peoples Assemblies to demonstrate a different kind of politics.

Whilst at the beginning the mainstream media was very much against the movement, over the 10 days of rebellion attitudes began to change and shift due to the non violence being exhibited, as well as the sheer energy of those taking part in the rebellion with music, food, gatherings and creativity involved.   This was an International Rebellion with over 26 countries taking part in over 80 cities around the world.  A UK poll has found that there has been a massive shift in peoples awareness of the importance of the climate emergency we are facing.

After Greta Thunberg took to the stage at Marble Arch in the second week of the rebellion (with Massive Attack following on!) and after she spoke with political leaders the next day, the Secretary of State for the Environment Michael Gove met with XR reps on 30 April and, by the next day on Wednesday 1 May, the UK became the first country to declare a Climate & Environment Emergency through its Parliament following a Labour-led motion.

Although this is a historic achievement and will lead to further action in other countries, XR’s position is that this Declaration does not go far enough with its proposal for net zero GHG by 2050 (based on the recommendations of the Climate Change Committee released the day after the declaration).

Mothiur, a member of ALN, is also an XR activist and has been part of its political strategy team as well as the “vision sensing” team that helped shape its narrative.   He is one of its spokespeople and some links to interviews by him on the radio here and in the US are below:

For more information on XR: 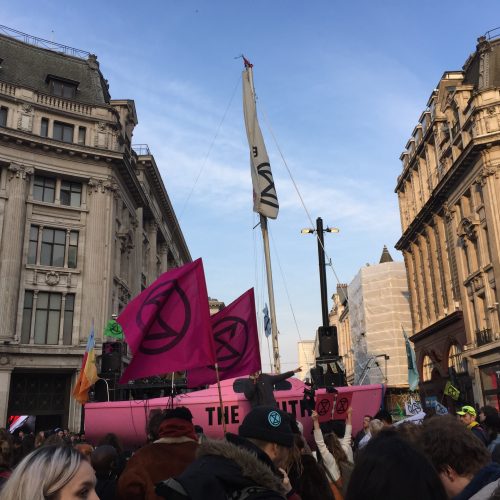