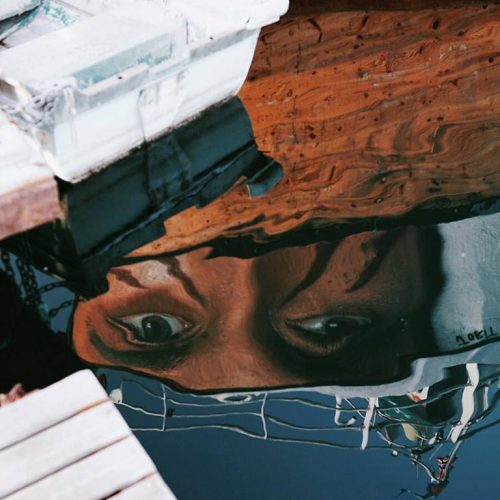 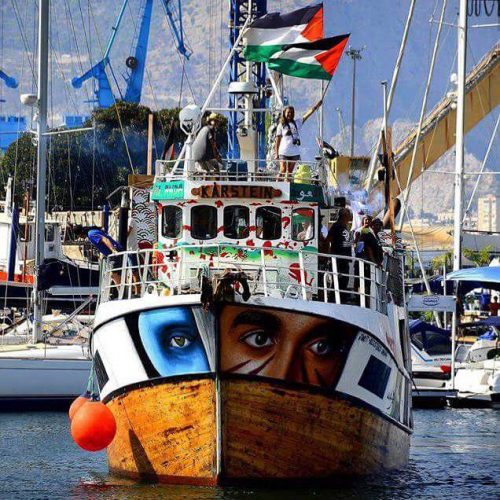 Responding to ongoing calls from Gaza to break the Israeli blockade deemed illegal under international law, four Freedom Flotilla boats have recently set sail in July 2018 from different ports in Scandinavia. After meeting up in Copenhagen, they then travelled, sometimes together and sometimes separately, towards Gaza. Along the way the convoy formally stopped at 28 ports and held tens of public meetings and activities, often hosted by local mayors and greeted by other dignitaries.

At most of the stops local artists visited the boats and used them as a canvas to convey messages of solidarity and resistance to the intended recipients – the Palestinian people of Gaza to whom transfer documents for the boats had been executed. In addition, the boats added a substantial quantity of medical supplies (including #Gauze4Gaza) following the massacres perpetrated during the Great March of Return.

Amongst the artwork is a painting of Vittorio Arrigoni’s eyes on the front of ‘Al Awda’. Vittoria was an international activist who was murdered whilst campaigning for justice in Gaza. Artist Jorit Goch painted his eyes on the boat, but was arrested in Palestine recently following his alleged painting of Ahed Tamimi’s eyes on the Apartheid Wall.

Another artwork on ‘Freedom’ is the iconic painting of Handala, originally drawn by Palestinian political cartoonist Naji al-Ali, who was assassinated in London in 1987. 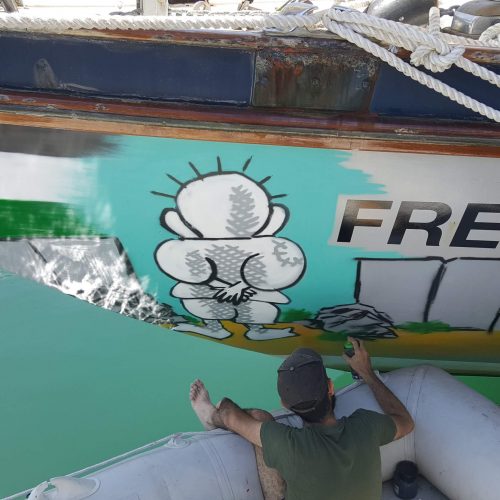 “The idea was to colour the boat so much that the Israeli Occupation Forces (IOF) could not hide our message – even if they took down the flags. This was also the case in some ports that demanded us to take down banners and flags. But it made no practical difference as we were covered in art that showed our message. The art also served a purpose of letting artists and other people who were unable to be on the boat feel that they were on the boat and thereby to demonstrate breadth of support from all over the world.”

Al Awda was forced into an Israeli port in international waters on Sunday 29 July by the IOF, the forces tearing down the Norwegian flag which Al Awda sailed under. The Israeli authorities detained everyone on board including journalists, most for several days and stole most of their equipment and possessions.

The flotilla is set to continue to sail for as long as possible raising awareness of governments’ failure to end the illegal Israeli blockade of Gaza, where Palestinian people are denied their human right of freedom of movement and prevented from achieving a just future.

‘Freedom’, the second boat of the Freedom Flotilla is currently approaching Gaza – please share this story and the artwork widely and help safeguard the medical supplies destined for Gaza, the artwork on the boats intended as a gift, the people on board and most importantly the more than two million  Palestinian people of Gaza – half of whom are children – who are collectively punished contrary to international law.

Israel has occupied the Gaza Strip since 1967 and, as the occupying force, it is responsible for the well-being of the population within this territory. In 2011, five independent UN human rights specialists reiterated that the blockade of Gaza is illegal because of its disproportionate effects on the civilian Palestinian population. The United Nations has warned that if the siege of Gaza continues, normal life will not be viable there in 2020. The current blockade has been imposed for 12 years by Israel and Egypt, with support from many international governments, and restricts the movement of people and goods.

By applying restrictive measures that affect the population as a whole, it violates Article 33 of the Fourth Geneva Convention, which prohibits collective punishment. For more background, see the 2017 Report of the UN Economic and Social Commission for Western Asia (Israeli Practices towards the Palestinian People and the Question of Apartheid) and this report from Amnesty International (Israel remains occupying power in Gaza and thus bound by the Law of Occupation).

Freedom Flotilla assert that their boats have a right to exercise the ‘Freedom of the High Seas’ granted by Article 87 as well as ‘innocent passage’ guaranteed under Article 19 of the UN Convention on the Law of the Sea 1982, which should lead to international authorities intervening to protect our unarmed boats.

The Freedom Flotilla Coalition demands the immediate release of the 116 boxes of medical supplies for the health services of Gaza that were carried on the Al Awda and Freedom boats of the 2018 Freedom Flotilla to Gaza, recently seized by Israeli forces. As Swedish Foreign Affairs Minister Margot Wallström has stated, the ship’s cargo must be released, according to international law.

International law also requires the delivery of medical supplies. Article 23 of the Geneva Convention Relative to the Protection of Civilian Persons in Time of War (Geneva Convention IV, 1949) says that “Each High Contracting Party shall allow the free passage of all consignments of medical and hospital stores … intended only for civilians of another High Contracting Party, even if the latter is its adversary.”

Additionally, the San Remo Manual on International Law Applicable to Armed Conflicts at Sea (12 June 1994) says in paragraph 104: “The blockading belligerent shall allow the passage of medical supplies for the civilian population or for the wounded and sick members of armed forces, subject to the right to prescribe technical arrangements, including search, under which such passage is permitted. Further, the San Remo Manual on the Law of Non-International Armed Conflict (2006), says in point 2 in the commentary to Rule 2.3.10: “By extension, all objects indispensable to the survival of civilians should be protected, especially medications. The protection means that the enemy is not permitted to attack, destroy, remove, or render useless the aforementioned items.”

To support the Freedom Flotilla, for latest news, or background information visit: 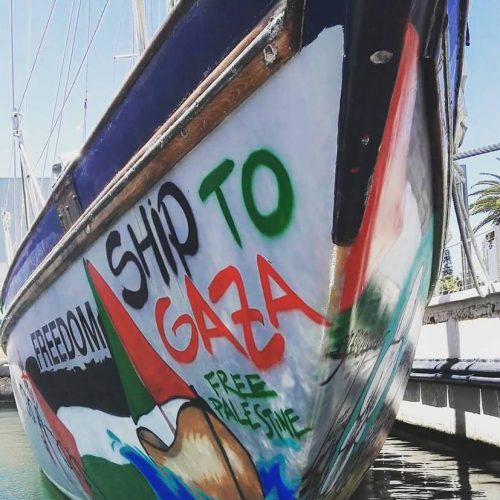