In this UCL Laws talk, Carey Young, visual artist and Associate Professor at the Slade School of Fine Art, UCL will present and discuss her artistic work, which has addressed law for the last 15 years. The talk will centre on a screening of her video Palais de Justice (2017), which was shot at the Palais de Justice in Brussels, the main courthouse of Belgium. Contradicting the familiar patriarchal culture of law, Young’s camera depicts female judges and lawyers sitting at trial, directing proceedings and delivering judgments. The film subtly builds a counter-narrative: a legal system seemingly centred on, and perhaps controlled by women, as if male presence may be optional or unnecessary in this particular future. Young filmed through a series of circular windows in courtroom doors, always shooting without the knowledge or permission of her subjects or the court. The windows and the camera’s lens are suggested as an interwoven series of oculi, in which we watch justice as performance, and are ourselves implicated as witnesses and voyeurs. The New York Times termed it ‘a distinctly feminist view of jurisprudence … sensitive and bleak’. Artforum reviewed the piece as ‘mesmerizing’ and ‘transfixing’, with Young’s cinematography ‘breathtaking’.

Young will also discuss her related body of artistic work which explores the aesthetics and potentials of law as an ‘artistic medium’. Young has collaborated with a legal team to make artworks in installation, video, performance, print, sculpture and photography which also operate as bespoke and experimental legal instruments. These have taken such diverse forms as disclaimers, contracts, offers, licenses, cautionary statements and a will, addressing such disparate legal fields as human rights, inheritance law, intellectual property and ‘outer space’ law.

Carey Young’s artistic work has been exhibited widely, including at Tate Britain, Centre Pompidou, Whitechapel Gallery, Dallas Museum of Art, MoMA/PS1 (New York), Walker Art Center (Minneapolis) and the New Museum (New York). Palais de Justice will have its UK debut in a solo exhibition at Towner Art Gallery, Eastbourne from Feb 16 to June 2. Young’s work is included in the public collections of the Tate and the Centre Pompidou, and is represented by Paula Cooper Gallery, New York. She is currently a Creative Arts Fellow at Wolfson College, University of Oxford, and an Honorary Research Fellow at the School of Law, Birkbeck. She has given lectures on her artistic work in law conferences at Princeton, Harvard, University of Cambridge Birkbeck and the École Nationale de la Magistrature, Paris, amongst others. A monograph on her work, Subject to Contract, was published by JRP Ringier in 2013. www.careyyoung.com 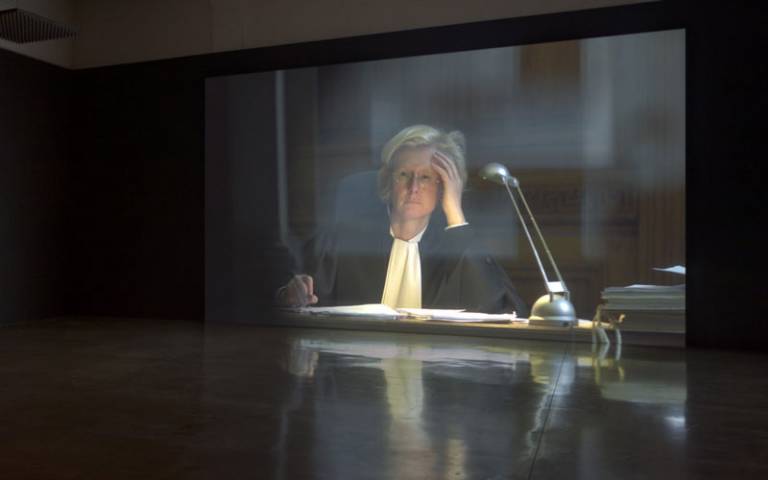