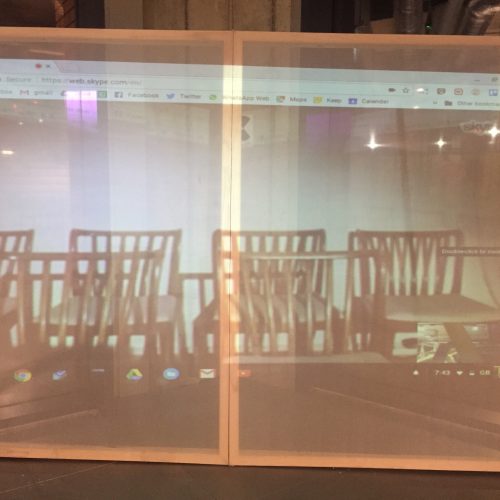 Law in the Limelight has been a series of workshops built in many ways on emerging legal performance scholarship,[1] exploring the relationship between theatre, performance and law. The third workshop in the series focused on the fourth wall, the invisible and imagined wall that exists between the audience and the actor. This wall is not normally penetrated; actors do not normally directly address the audience, and vice versa. This workshop asked, is there a fourth wall in legal performance spaces and, if so, how is it broken?

The fourth wall is, for the most part, firmly entrenched in legal performance, but there are examples of the audience breaking it. In the proceedings of R v Johnson, the accused interrupted the speaker by variously breaking out in bird and animal noises and a rendition of Tag Team’s Whoomp! (There It Is) in acts of violent defiance that led to catastrophe.[2] In parliamentary committee rooms, the audience is typically so close to the stage that they could reach out and touch a testifier or throw a pie in their face as almost happened to Rupert Murdoch during his testimony to the Phone Hacking Inquiry.[3] Years before, Tony Blair was hit in the back with a purple flour bomb thrown from the visitors’ gallery of the House of Commons.[4] Incidents like this have led to the construction of glass galleries and docks in courtrooms and parliamentary chambers.

Whilst glass walls are constructed to ensure the safety of legal actors, they also reduce the accessibility and, arguably, the atmosphere of the legal performance. The atmosphere of performance can be felt in terms of the haptic possibilities between actor and audience, that is, the possibility of touch between the two. Even in legal performance, there is “something special about physical proximity.”[5] When a glass fourth wall is introduced, there is no possibility of touching the actor, thus it reduces the audience’s relation to them. It feels something like the scene in Baz Luhrmann’s Romeo and Juliet where the two lovers first meet, but are separated by a glass fish-tank, distorting their view and inhibiting their touch. There might be a visceral visual reaction, but the connection would not sustain without the touch that follows.[6] Through the introduction of glass walls, the haptic possibilities of the performance disappear and the actor is literally out of touch with their audience.

The legal audience’s visibility is further explored in Judy Radul’s World Rehearsal Court, a video work of restaged scenes from international criminal tribunal trials.[7] At one point, the cameras pan and reveal the technological apparatus of the performance usually hidden behind the scenes. In this moment, there is a snap in the suspension of disbelief, a realisation that this is all a show. Whilst legal performance is supposed to be transparent, it so seldom is. The movement to use simple language, for example, gives the appearance of accessible language but veils the complexity of the jurisprudence behind it. Transparency is the new opacity. Arbitrary power and secrecy is hidden in plain sight. The blind spot is no longer an identifiable spot but enmeshed in the fabric of sight.

During the workshop, it was argued that a legal performance audience is more like a gallery audience than a theatre audience. They come in and out, they are passive observers, and the legal actors do not play off the audience; the court is not looking for applause, direct response or even appreciation. In theatre, an actor always plays to their audience. Does a legal actor play in the same way?

It is worth noting audience is not a static concept in legal performance. There are many legal actors who play the role of audience at some point. The common law judge is audience during most proceedings but then a powerful actor at their end, as is the jury. The defendant is audience to their own trial. The lawyers oscillate between acting and spectating. The testifier is the archetypal “poor player that struts and frets his hour on the stage and then is heard no more” receding, if they please, to the gallery.[8] The public gallery is certainly an audience to the proceedings, but at times acts within them as they stand to welcome the judge. The gallery to a legal performance might be best described as an ‘outside audience’ who have an itinerant experience of legal performance, coming from the outside in.

However, legal audiences are not merely passive. This overlooks the constitutive role that the audience plays in legal performance and the manner in which their live encounter with the stage informs the actors’ performance. The possibility that the audience could interrupt or intercede in the space lends a powerful tension to live legal performance. Their role as observers adds legitimacy to the legal performance. There is no performance without audience. Legal actors are also certainly conscious of their audience. The visibility of the performance to outside audiences affects its delivery and presentational style. The actors dress up, the space is designed for clear sightlines, microphones amplify the voice and dialogue (as discussed above) is occasionally modified to render it more understandable to an outside audience.

The gathering of bodies together in space is significant to the legal performance. However, this is being challenged by the introduction of audiovisual technology and online courts that enable testifiers to give evidence from remote locations beamed into the court or online spaces. As our ways of viewing change, so will the legal performance. Part of the struggle to date is that we have asked legal practitioners and scholars to make sense of this, when we need to turn to artists and performance-makers. Instead of turning inwards, we must turn out.