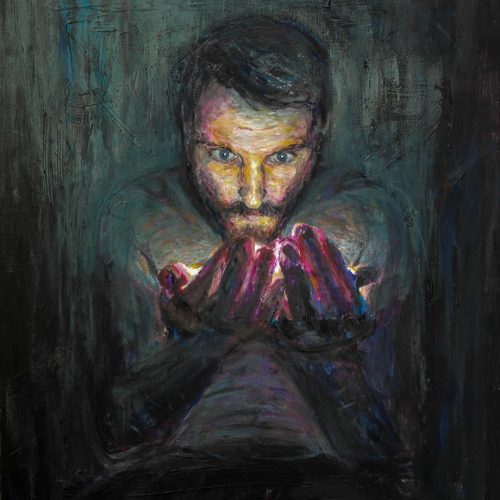 I have no training in art.  My creativity at school was limited to doodles on my books.  And yet now, I find that art has become a crucial tool.

About a decade ago, my life went off the rails, and I was sentenced to a short spell in prison.  Not only was this an opportunity for me to get clean, but as it turned out, it would become the start of a passion.

I initially started to sketch as a way of recording the people and spaces in the prison.  Almost by accident, I joined a brief art course, and gained access to a library full of artists I had never heard of.  I poured over the books, and discovered styles that really spoke to me and themes that I could relate to.  I began to paint to explore my situation – the conflicting feelings of guilt and anger, of isolation and camaraderie.

Strangely enough, insofar as I ever considered myself to be an artist, I originally related to the term ‘Insider artist’ which I found in an anthology of prison art by Matthew Meadows (well worth a read).  It was only on my release that I realised many people would refer to me as an ‘Outsider Artist’.  But what does that mean?  Is it a comment on the artist themselves, or their work, or merely on how the rest of society view them?

Firstly, there is an undeniable link between art and law.  In my case, and many others historically speaking, living on the fringes of society (or beyond), both in a legal sense and a community sense, has provided the stimulus for creativity.  Sometimes, I suppose that this feeling of rejection or isolation has caused artists to deliberately try to subvert the world of art, which is often seen as elitist and esoteric.  But frequently the art world is drawn in by this, and consequently grows to include what was once outside.

Perhaps a tenuous metaphor is in order.  The art world is a vast sprawling conurbation.  Artists can set up camp far from the city, or on the outskirts looking in, but both the city and their camp is growing, so the two often eventually merge.  So perhaps the only way to remain an outsider artist is to forever be moving your camp further from the city. No mean feat.

From a personal point of view, I know that other people using this term to describe me and my work has given me a platform and for that I am grateful.  I was honoured to be part of an exhibition and seminar at the University of Sussex, and when I told a 3rd year student that I struggled to see myself as any sort of artist, let alone outsider or insider, she came back with a pertinent observation – part of the definition of artist belongs to her.  So by that logic, people can call me what they like… within reason!

I don’t have the answers.  I can see the issues with the term, and I can appreciate that it may put up barriers where none exist.  After-all, some of the world’s most popular artists didn’t have formal art training, and many of them created art from their personal experiences of isolation and rejection.  But surely it’s all well-meaning; it’s often part of a movement to promote artists that might otherwise struggle to find the limelight, offering them an opportunity to get their work into public view.  But fundamentally, for me, there will always be a certain irony in presenting social isolation in a way that feels safe and even monetizable to people who may have helped cause it in the first place.

Arthur is an untrained artist who first engaged with art during a brief prison sentence.  His experiences of the legal system and incarceration provide stimulus for much of his work.

He has had work in several exhibitions, and is a member of Outside In, Arts & Health South West,  and the National Criminal Justice Arts Alliance.

He also works to advocate creativity, both in secure settings and beyond:  He was part of an All Party Parliamentary Group that held an enquiry into the link between creativity and well-being, and is also one of the founders of The LENS (Lived Experience Network) – a group of people who promote (and have used) creativity to address issues with well-being and health.